So I sold my soul for 7 copic markers today and it was well worth the price. I've been having fun with them all night. ANywho here's a doodle i did of myself. I've also added a quick color study for my fortress layout. I spent a good bit of time today screwing around with the sky and getting it mold itself into the rest of the layout. Regardless of the struggle I had with it today though I really like the "mellow" sorta feel thats going on with it now. 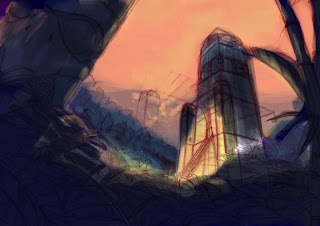 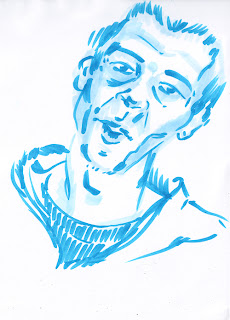 Posted by Chris Thompson at 1:55 AM No comments: 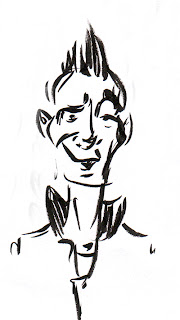 just a sketch done with my brush pen when I was taking a break from animating earlier today.
Posted by Chris Thompson at 5:59 PM No comments:

Here is a couple tonal studies done for my layout so now it's time to get some color on this bad boy.

Side note. I'll be going with the one on the right side.
Posted by Chris Thompson at 5:36 PM No comments:

Most Hilarious Comb Over ever...!

Well this is not art related but it's too funny not to share with the rest of the world.

The story goes a little something like this! First off this all takes place on a chilly Sunday evening in the Oakville Shopping Mall. As per usual Braden, Lorenzo and myself had met up in the food court near the bathrooms where attractive females seem to vanish. The three of us often wonder what happens to them, but instead of going to find out we just sit there and wait in hope that they'll be back like any true creep. Perhaps one of these days we'll actually venture into the bathrooms and discover where all these beautiful women have gone. But for now we will just agree that wherever they do happen to go, it's a place we'd all like to see for ourselves. But back to the main point behind this post. At some point in time while the three of us were slouched off in our seats drawing all the wonderful people that Oakville has to offer us there was this one lad who stuck out from the rest. The first discovery of him was founded by none other then The Amazing Action Ape!.. aka Braden (but why would anybody want to call him Braden is beyond me) After The Amazing Action Ape founded this strange lad he swiftly turns to his right to inform me, I then take a glance to the left figuring there was yet another attractive female venturing into the beyond but to my surprise it was a man.. a man with the most retarded looking comb over in history. ! Of course after seeing such a sight there was instant laughter pursued between the two of us and eventually it grew onto Lorenzo once we showed him what all the laughter was about. So while the three of us were laughing at this man who happened to be standing RIGHT beside us (because we're discrete like that) I figured it was too good to be true and snapped a picture with my cell-u-lator. A video would have been even funnier but I didn't think about doing that until hours later; And so, I now present to you the "i-don't-care-i'm-married" haircut (because somehow this son of a bitch does have a wife.. ?) 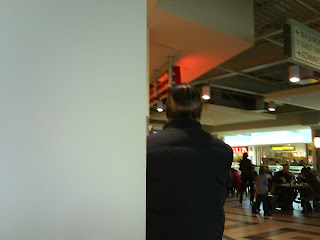 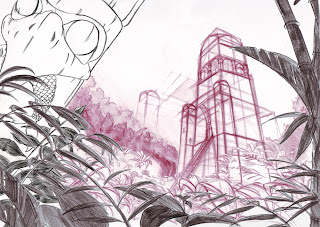 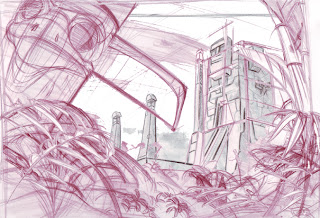 This is a more developed version of my fortress drawing that was done for layout class since it now has to be used in painting; and since I love our panting class I have put a lot more time into it now. (the fortress is still the same but the foreground has had a huge makeover) On that note there will be some refinements on the fortress itself too. Again this is rough and I'll be working on a much cleaner version tonight and hopefully have some tonal studies done as well. So hopefully there will be more to come of this real soon.

This post has now been updated with a newer version. tonals can finally commence!
Posted by Chris Thompson at 9:00 PM 2 comments: 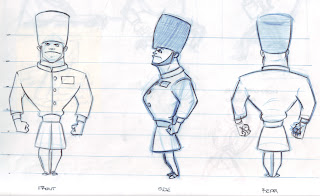 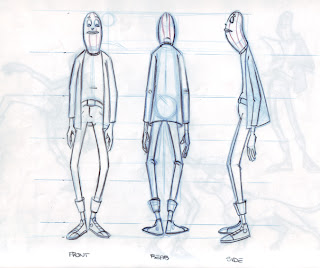 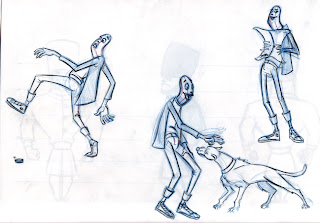 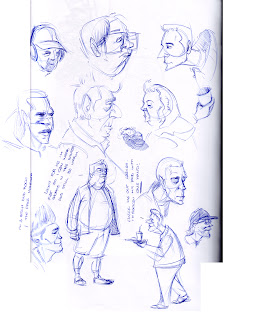 So I had a blast at Oakville Place today drawing people while listening to some Bonobo to start off my day. On top of that I have my recent char designs to post. My Russian guards action poses fell apart so I'm not posting those.
Posted by Chris Thompson at 2:33 PM 1 comment: 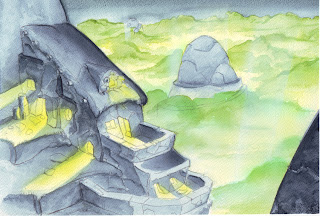 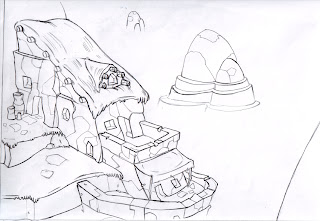 A painting / layout I came up with at the beginning of the school year. How exciting.
ps. the painting was done with watercolors and cleaned up with an air brush.
Posted by Chris Thompson at 5:56 PM No comments: 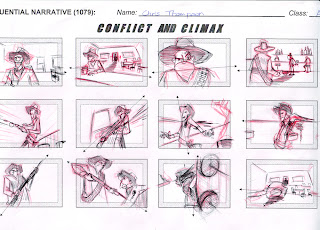 This is a storyboard assignment where we have to follow set rules as to how each of the 12 panels are used involving a line that can be used as a horizon, or maybe a line of action. Then there is the circle that is supposed to be a the focal point. The story also has to involve two characters who are in a non-verbal conflict.. thus they are out to hurt each other.. or in this case to kill one another.. Neither of the chaps in my story are good guys and just happen to be two males that don't get along. Why? I really don't know. Anyways this is what I happened to come up with. I wouldn't mind them being a bit cleaner / easier to read but since it's supposed to be an in class assignment it should be fine. Or so I hope.
Posted by Chris Thompson at 3:32 AM 1 comment: 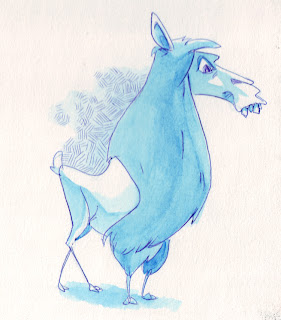 Just a more developed characture of a lama i drew at the royal winter fair this past week.
Posted by Chris Thompson at 4:10 AM No comments: 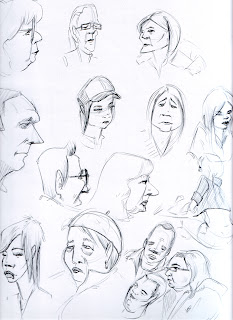 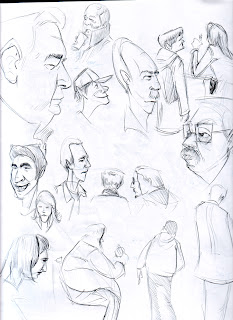 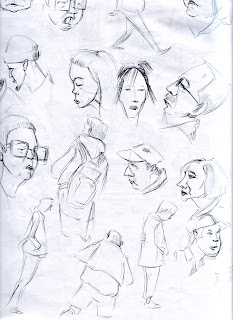 Just a couple pages of sketches i did in the mall here in oakville..
Posted by Chris Thompson at 6:25 PM No comments: 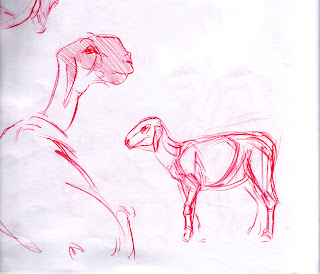 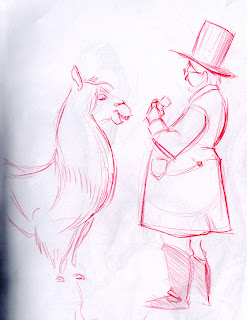 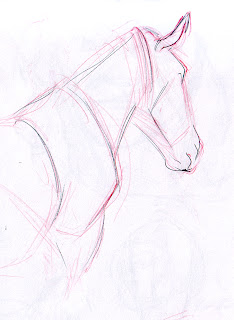 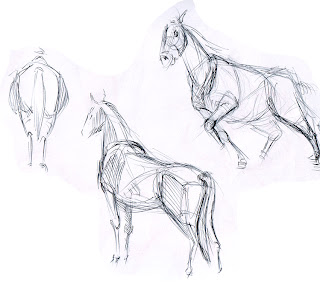 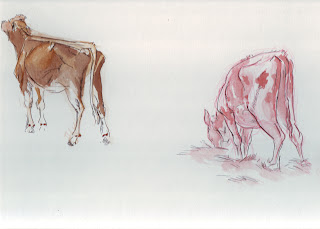 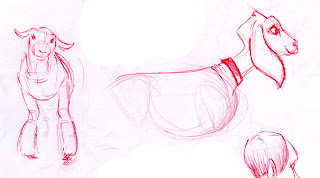 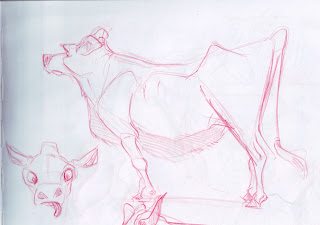 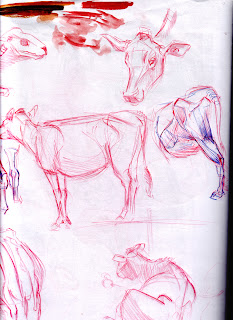 just some of the drawrings i did at the good ole winter fair this week.
Posted by Chris Thompson at 6:20 PM No comments: 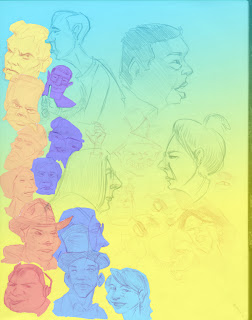 This is a page from my sketch book with some color added in photoshop.
Posted by Chris Thompson at 12:16 AM 3 comments:

The Pen is Mightier than the Sword 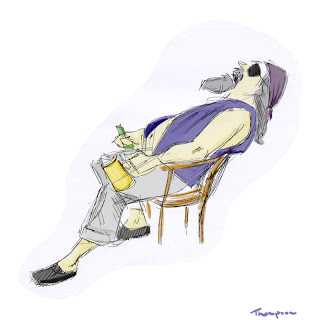 But in this case I just wanted to try using a pen in extra life drawing for the first time. Sadly I can count on one hand how many time I'm after going to extra life this year..

ps. this is a 5 min that i scanned and put some quick color on top of it in photoshop
Posted by Chris Thompson at 11:58 AM No comments: