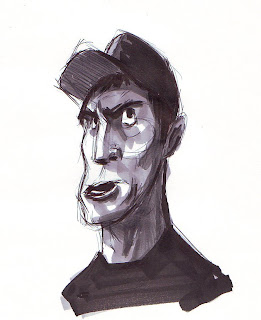 On a total whim I ended up creating a self portrait of myself.
Posted by Chris Thompson at 5:02 AM 1 comment:

Well.. after many months now and starting to lose faith in myself with regards to coming up with a film that's short, sweet, and to the point.  To my surprise though, something finally started to come together for me as of today.. Even though the idea sparked from a situation I was in the other day when trying to get back to my car before what looked to be a massive thunder storm in the makings, my film has nothing to do with racing storms.
Really not sure what the setting will be, but it could be post apocalyptic, and will most likely start off in a mountain valley.  Nothing concrete though since again, I only came up with this idea today.  I'll get more into detail a little later on when I have more to show.. But for now I have what looks to be the main character. 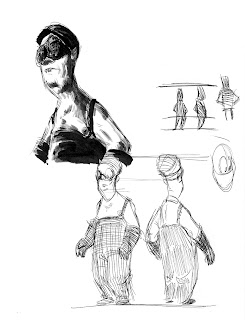 He actually started off an old innocent cripple of a man.. But throughout the day he evolved into this.. in fact I wasn't even trying to come up with a design for him either, I was trying to figure out what the secondary character (a robot) would look like.  There may also be a third character which will be a little girl,  but I'm beginning to think she won't be necessary.  SO.. probably just this guy, and a robot.
Posted by Chris Thompson at 3:36 AM 2 comments: