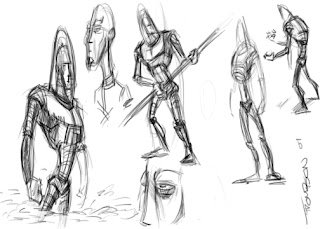 just a couple sketches I did here at good ole' work. One thing I have really been trying to keep in mind lately when creating a character is rhythm to hopefully make my characters more unsuccessful this year. Anyways.. time to start doing some work related things.
Posted by Chris Thompson at 3:13 PM No comments: 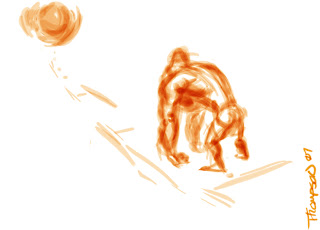 A new year of study in the field of animation is soon to begin!

I don't know about the rest of you but I'm pretty damn eager to get back into the swing of things, even though summer holidays have seemingly gone by pretty fast I still feel that it has been too long since I was last sitting in a classroom (or failing to go to class in most cases as many of you know)

Anywho, I've been hella slack on updating this blog of mine.. it doesn't mean that I haven't been drawing n' such because I've been doing plenty of dawring I just never bother scanning anything. None the less today I have an update.. it's nothing special.. just a quick doodle I did here at work on the ole tablet of a gorilla type character about to embark on a journey of his own.